We’re not going to lie—the team here at Medal on My Mind loves comics and graphic novels. So we’re particularly excited about this inaugural roundup post!

The Stonewall awards have a short but sweet history of recognizing graphic novels. In the Young Readers category, Drama got an honor in 2013 and a+e 4ever was honored in 2012. In the Nonfiction categories (irrelevant here but still good to know), Fun Home took home the gold in 2007 and Pedro and Me was honored in 2001.

There are a number of graphic novels this year that have the potential to be contenders in the Young Readers category. There are also a number of volumes of comic books that could be eligible, depending on how one interprets the award criteria. The GLBTRT site about the awards notes:

So where do volumes of comics previously published as issues fit into this framework? How about webcomics now published in print? Team MoMM hopes they’ll be considered, so we’re tossing them into the mix here. What do you think?

The first volume of The Backstagers collects the first four issues of this Lumberjanes-esque comic. When the story opens, we meet Jory, a brown-skinned boy who’s nervous to start his first day at an all-boys high school. He decides to join stage crew as an extracurricular activity and falls into a magical world of romance, mystery, and camaraderie.

In an interview, the creators (who are both queer) describe the world of The Backstagers as one “in which queerness [is] inherent,” and it really couldn’t be more true. We see an incredibly diverse array of queer masculinities. Jory finds boys “scary.” Hunter is flirtatious and carries an electric drill. Timothy and Jamie are white-presenting stage managers who are a couple. Introverted, teal-haired Beckett has light-brown skin and openly wears what appears to be a binder. Each of the boys is uniquely queer, uniquely teenage, and uniquely endearing. Fingers crossed this one gets the attention it deserves! —Kazia

Based on the Nickelodeon animated television series of the same name, a sequel to Avatar: The Last Airbender, the comic picks up exactly where the groundbreaking and controversial series finale left off. As (SPOILER ALERT) Avatar Korra and her girlfriend Asami embark on their vacation in the spirit world, readers are treated to montages of their queer lady dates. They kiss—something they never got to do in the show. Korra and Asami come out to everyone from Korra’s parents (who are accepting but encourage them to “keep your personal life private”) to Korra and Asami’s mutual ex-boyfriend. Readers learn, along with the couple, about the ways different tribes, kingdoms, and nations interact with and respond to queer people in their communities. We also learn about the queer identities of other secondary characters, including a previous Avatar.

This is a comic that definitely works best if readers have already seen the show (ideally, both shows), so it’s doubtful this will be a strong contender for the actual award. However, that the book features strong, complicated women of color in a relationship and discovering their identities is hopefully reason enough for some of you to pick it up! (And when you do, cry with me about it in the comments.) —Kazia 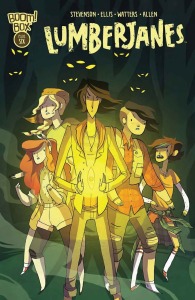 Lumberjanes Volume 3: A Terrible Plan got some love from last year’s Rainbow List, so why not reach for the stars and hope that double the Lumberjanes volumes will equal double the love?

Although, to be fair, this volume (collecting issues 21-24) probably won’t do the trick. All the queer characters are still queer, but the only acknowledgement comes when Mal and Molly kiss adorably when they’re reunited after facing danger and when they hold hands or hug. It’s rad that the Lumberjanes exist in a queer utopia where we don’t need to regularly acknowledge their queerness! It just doesn’t make it that applicable to the Stonewall. —Kazia

I’m really hoping that A Bird’s-Eye View, which collects issues 25-28, gets some love this year. Sure, the Roanokes are getting up to their usual shenanigans with magical kittens, giant birds, and Lumberjane grandmas. But, BUT: this is also the volume where (SPOILER ALERT) Barney, formerly a Scouting Lad, is inducted into the Lumberjanes, since “Miss Quinzella Thiskwin Penniquiqul Thistle Crumpet’s Camp is for hardcore lady-types,” and “It’s no one’s place but yours to say whether or not you belong here” (*sobs*). Barney is fraught with anxiety over admitting their desire to be a Lumberjane, lending a realistic element to an otherwise queer utopia, but they are instantaneously accepted, given their first badge (the titular “Bird’s-Eye View”), and welcomed into the Zodiac cabin. As a month-by-month reader of the issues since the first was released, I can say without a doubt that this is one of the best, most successfully-executed moments in all of Lumberjanes. We should be so lucky that the Stonewall committee might recognize this too!  —Kazia 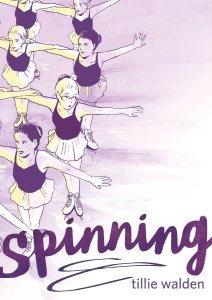 With starred reviews from Kirkus, Booklist, and Publisher’s Weekly, Spinning is on the radar of the larger children’s/YA lit community in a way the comics mentioned in this post may not yet be. Tillie Walden’s graphic memoir recounts her adolescence as a mid-level competitive figure skater. It’s not a glamorous depiction. There’s an almost palpable melancholy in the slow wearing down of Tillie’s drive to skate, heightened by the use of monochromatic indigo tones. We see Tillie give so much of herself to this demanding sport and get so little gratification in return. The overarching feeling of futility is intensified by the focus on relationship difficulties with parents and peers, recurring bullying, and significant moments of trauma. Spinning is critical of the figure skating community’s homophobia and fixation on stereotypical expressions of femininity (but doesn’t comment on the whiteness apparent on the page). Among her fellow skaters, Tillie keeps quiet about her sexuality, though she has been attracted to girls for as long as she can remember. Her first romantic relationship with a classmate, Rae, is short-lived because Rae’s parents find out and forbid Rae from speaking to her again—another loss that strikes acutely. This isn’t an upbeat account, but it is emotionally affective and adeptly told.  —Dani

Kate O’Neill was recognized on last year’s Rainbow List for her romantic all-ages graphic novel Princess Princess Ever After, and we’re lucky that she’s back again this year with another delight! A codex edition of O’Neill’s sophomore webcomic, The Tea Dragon Society is somehow even more precious than O’Neill’s debut. The comic follows Greta, a brown-skinned, horned goblin training to be a blacksmith like her mother. However, when she comes across a small dragon, she stumbles upon the dying art of tea dragon cultivation, and a small community to go along with it. She meets and begins training with Hesekiel, a grey-furred, camelid-esque being who raises tea dragons and cultivates their tea. She also meets his partner, Erik, a human with light brown skin and long brown hair who uses a wheelchair. As she apprentices with Hesekiel, Greta also befriends Minette, a faun-like girl with pink hair, pale skin, and memory, and they tentatively begin to explore a mutual crush. This comic doesn’t dig very deep, but it gives positive representation to a diverse variety of bodies and identities and is an extremely sweet and gentle reading experience! —Kazia

There’s a lot to unpack in this one. It’s a graphic novel with charming artwork featuring characters of varying skin tones and body types with overt and implied queer representation, great! But is this story successful? It’s that implied representation that’s giving me pause. Girls are witches and boys are shapeshifters, and those are the rules in Aster’s real-world-adjacent magical community. Aster isn’t interested in shapeshifting, nor is he able to do it; however, he proves to be skilled at the witchcraft he learns on the sly. Everyone around him hopes he’ll grow out of it. Lurking in the background is the specter of Aster’s grandfather Mikasi, the villain of the story, who is described as a man who had similar inclinations toward witchery and suffered greatly because of them. Mixing different types of magic corrupted Mikasi’s powers, and he shunned the witches because they wouldn’t accept him as one of their own. When Mikasi tastes Aster’s soul, he declares that Aster has “the soul— of a […] WITCH!” (171) and Aster agrees, but what exactly this means is unclear. The terms “witch” and “shapeshifter” conflate sex, gender, and gender identity (just as the terms “girl” and “boy” do). These distinctions never get parsed out; instead, they’re simultaneously elided and neglected altogether. The trouble is that rather than representing trans identity, the narrative uses magical ability as a metaphorical stand in for it, and that raises a lot of questions. —Dani

So, what are your thoughts on these?  Is there anything you’re loving this year that’s missing from this list?