I’m not going to lie: I’ve had a really hard time figuring out how to write this post. The books I’m talking about today are COMPLICATED, and so are my feelings about them. I also feel like, despite being a polysexual/polyromantic person (not to be confused with polyamorous), I’m not the most qualified to write about the quality of representation in these texts. Both Honestly Ben and Looking for Group feature teenage boys who move from monosexual identities (straight and gay, respectively) to a more complicated understanding of their sexualities as they experience for the first time profound sexual and romantic attraction to a single person who doesn’t fit into their previous sexual orientation. However, for both boys class and masculinity intersect to shape their own responses to their shifting sexual and romantic identities, and this is something I can’t speak to as a middle class woman (it’s also not something I’m going to touch on in detail here, but it’s an undercurrent that’s always present in the texts). So please bear with me as I try to parse out my thoughts and feelings about these complicated books! 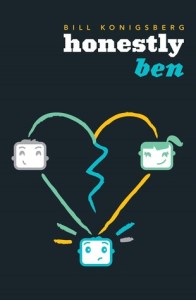 Honestly Ben has been pitched as a companion to Openly Straight, in which out gay teen Rafe decides to return to the closet for his first year at an all-boys boarding school and becomes romantically entangled with his straight best friend, Ben. However, Konigsburg’s latest picks up after the end of Openly Straight, and this time we get the first-person narration of Ben Carver. Feeling betrayed by Rafe’s lack of honesty about his identity, he’s broken off their friendship and is focusing on his baseball team, maintaining the academic excellence required for his scholarship, and dating a townie named Hannah. But soon, Rafe re-enters Ben’s life, and Ben starts to realize that, maybe, Rafe is the one for him.

Ben spends a lot of time in his own head. He comes from a New Hampshire farming family, a family in which no one–especially the men–talk about anything, much less their feelings. As a result, he doesn’t say everything that comes to mind, and that makes his conversations with other characters even more poignant and significant. I love the scary but open conversations Ben has with Hannah, when he decides to be upfront about his friendship with Rafe and what happened in Openly Straight:

I gulped. “Last semester, I had this thing with my best friend at the time. He’s gay and, well, I’m straight. But, like, I felt, you know, really close to him. We connected on such a deep level, and I just wanted to be with him, which was weird because–I can’t believe I’m telling you this.”

Nothing about her expression made me feel like she was about to judge me, and she nodded as if to say, Go on.

“It was weird because I’m definitely, definitely, like, NOT into boys, and not like one of those guys who lies to themselves and then dreams about Justin Bieber. He’s a person, right?”

“I mean not gay like actually not gay. Other than this one guy, I haven’t ever thought of guys that way. And girls, I do–’I stopped, embarrassed at how forward I could be when I let myself. It was like she was bringing it out in me.” (142-143)

“So we were together once. Twice, I guess, if I’m being completely honest. And I am.”

I shrugged. I didn’t think this was the time to lie, but it also probably wasn’t the time to go nuts with the whole I fooled around with a guy and I really liked it angle either. (143).

“Just so it’s said, you doing that is, like, the opposite of a roadblock for me. I think it’s awesome that you have that side of you. I sometimes think I could be pansexual, but I’m probably more pansexual in my brain than in reality, you know?” (143)

The level of nuance to Ben’s sexuality is refreshing–he’s definitely attracted to women and is also physically and emotionally drawn to Rafe, but he’s not particularly sexually interested in Rafe until he realizes that he (Ben) is in love with Rafe. Ben explores which labels do and don’t feel right for him:

Was I bi? Hi, I’m Ben Carver, I’m bisexual. It just sounded so . . . foreign. Yes, my uncle was bi, and obviously a lot of people were. But to me, bi meant equally attracted to boys and girls. I wasn’t that. I was basically attracted to girls and one specific guy.

Now, I’m definitely uncomfortable with the way that Ben “understands” bisexuality (for a more accurate definition, see here). But I do think it’s important to acknowledge that Ben considers his sexuality, self-reflects, and decides that he really does feel “gay-for-Rafe.”

Ben isn’t the only character who struggles with his identity. Ben and Rafe’s friend Toby comes out as genderfluid:

He looked away, and I looked down at the ground. “Okay,” I said.

We sat in silence for a bit.

“You don’t actually know what that is, do you?” he asked.

I shook my head. “I mean, I guess I have an idea. Does that mean you like to dress up like a girl?”

He shook his head. “No, not exactly. Like, female. Like if a teacher calls me “Mr. Rylander,” I think they’re talking about someone else, because I’m definitely not a mister. And then there are other days when I’m fine with it, because it feels like I am male.’

It’s really exciting to see Konigsburg write a protagonist who is genuinely kind and thoughtful towards his peers. Konigsburg previously won the Stonewall for The Porcupine of Truth (somebody someday please explain to me why it won?), so I’m sure Honestly Ben will be on the committee’s radar.

r Group is a pretty polarizing book. Dylan is gay and has spent most of his life with a cancer that was seemingly terminal but has now “disappeared”. Living with his neglectful and emotionally abusive mom, he’s used to having no money, no friends, and no affection. He is, appropriately, the antithesis of Hazel Grace Lancaster: perpetually bitter, struggling with a slight addiction to his medication, and pretty heavily self-loathing. His only solace is in World of Warcraft and the one friend he’s made through playing. Arden is a white, upper class trans girl whose father constantly misgenders her. Both feel unseen and unloved at home, so when Dylan suggests they roadtrip to find the Lost Ship of the Desert, Arden jumps at the opportunity.

The two always flirted in WoW, but as they spend more and more time together, Dylan can’t deny the feelings of romantic and sexual attraction he’s feeling towards Arden (and which are reciprocated).

Outside the game, even, I know Arden’s a girl. I don’t doubt it; it’s not like it’s an opinion or anything. It’s a fact: Arden is a girl and always has been.

Just the same; I’m gay and I always have been. I was gay when I was little Dylan, and I was gay when Andre marked me off his bucket list, and I’m gay now, wanting to hold Arden’s hand and lay next to her in the hotel and get her to look at me again. So did I change? Am I bi or something? Or am I dick who says the right words, but thinks the wrong things? (208)

This is a question that Dylan comes back to over and over again, but he never settles on an answer. And, honestly, I feel like this is both a strength and a weakness of the book. It’s great that Dylan spends so much time concerned about and acknowledging that his attraction to Arden may be for the “wrong reasons” (52), as much as he hopes that it’s not. But I’m also disappointed that this barely causes him to reflect on his own sexuality as potentially polysexual/polyromantic. And it’s not that I want him to firmly land on an identity, or decide that he is polysexual instead of monosexual, but I do want him to have thought about it more.

One thing I do love is the way that Dylan makes note of Arden’s body without passing judgement on it. When she buys a pack of razors, he notes “she’s got a pretty good shadow on her jaw at the moment” (174), but doesn’t comment further. When they eventually have sex, he’s descriptive: “Her pale hand drifts in the dark, down to adjust her body the way she wants it. When she smooths her sac out of the way, I glide in to press my thigh beneath it” (302). I’ll admit that I’m not as widely read as I’d like to be in terms of trans YA, but this feels pretty revolutionary to me.

I’m trying to sit and, well, be comfortable with the discomfort of not having a succinct and definitive opinion about these complicated books, so I want to hear from you. What do you make of Toby’s public coming out? Of Ben’s “gay-for-Rafe” identity? Are you tired of or refreshed by the use of a water metaphor for sexual and romantic fluidity in both Honestly Ben and Ramona Blue? What do you make of Dylan’s attraction to Arden? What else struck you? Let’s talk in the comments!

One thought on “Honestly Ben & Looking for Group”