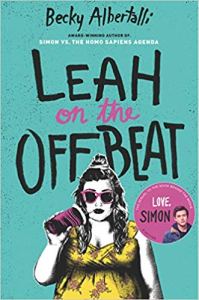 Leah on the Offbeat by Becky Albertalli
Balzer + Bray, April 2018
Reviewed from hardcover

Plot Summary: As the follow-up to Simon vs the Homo Sapiens Agenda, Leah has enjoyed a lot of automatic YA limelight from the get-go. Fat, bi, Jewish, and from a lower-income, single-mom family, Leah has always felt like the odd one out in her friend group. Her insecurities aren’t helped by shifting dynamics and rising tensions as the end of senior year looms large. In the months leading up to prom, relationships change, especially Leah’s with Abby. The prospect of attending college together and Abby’s recent break-up bring the former friends closer, and Leah is reminded of the attraction that caused her to keep her distance in the first place.

[Heads up, this discussion is spoilery.]

Queer Rep: A novel with a bi protagonist who comes out over the course of the story, a perfect blend of wry humor and serious feeling, and a sweet interracial f/f romance. Sounds great!

And mostly, it is. The one part of this book that’s proven polarizing among readers is also significant to how it handles queer representation. There’s a moment where Leah polices Abby’s queerness. Abby refers to herself as “‘lowkey bi,’” which Leah rejects, saying, “‘you’re either bi or you’re not’” (260). Abby says, “‘You don’t get to decide what my label is,’” to which Leah replies, “‘It’s not a real label’” (261).

It’s clear why this scene goes the way it does. Leah is critical of the way that the culture of heteronormativity allows for flirtation and experimentation that serves to confirm straight girls’ heterosexuality and creates social landmines for girls who are queer. I appreciate that the narrative spends time exploring this problem, because it’s real and relatable.

It’s still tough to see a character’s attempt to self-identify entirely dismissed and then never revisited. I see two possible ways to read Abby’s use of “lowkey”: not ready to come out publicly or more often attracted to men than women. Both of which are entirely valid ways to be bi. As much as Leah’s sensitivity is understandable, I wish the narrative had taken the time to push back on her perspective.

An observational side note: Leah participates in a pattern that I’ve noticed where bisexual girl protagonists are often portrayed torn between two viable partners, one a cis boy and the other not (I’m thinking specifically of last year’s Like Water, Little and Lion, and The You I’ve Never Known and this year’s Girls Made of Stars). It’s gotten me thinking about the use of bisexuality in narrative to provide ready-made conflict and the way being bi gets reinscribed as being about choices.

Final Word: Some folks might find enough merit in the aspects of the representation that are great to recommend this one for the award. I’m lukewarm about it as a Stonewall choice because its queer rep didn’t register with me as especially ground-breaking.

2 thoughts on “Leah on the Offbeat”