Today’s guest blogger is Stephanie Allen. Stephanie (she/her) is a University of Washington MLIS student, a teacher, and a young adult writer. You can find her on Twitter as @stephandrea_. 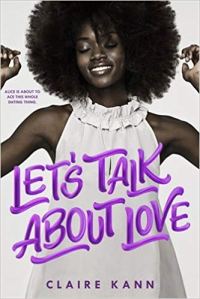 Plot Summary: After Alice’s girlfriend breaks up with her, her summer plans consist solely of hanging out with her best friends and working her part-time job at the library. What she didn’t plan on was developing a huge crush on her new coworker, Takumi, and she especially didn’t plan on Takumi liking her back. The thing is, the reason Alice’s girlfriend broke up with her is because Alice is asexual. Now, she’s spending her summer worrying about how to tell Takumi she’s ace and if telling him will ruin whatever is going on between them. Alice’s easy summer vacation just got a lot more complicated.

Queer Rep: Alice is biromantic asexual, which for her means that she experiences romantic attraction to men and women, but no sexual attraction. Alice’s sexual orientation is one of the book’s main conflicts, as it impacts both of her romantic relationships. The book opens with her girlfriend, Margot breaking things off because she interprets Alice’s lack of interest in sex as an inability to express her feelings. Later on, as she gets closer to Takumi, Alice grapples with whether to tell him she’s ace because she worries he’ll have the same reaction.

Despite Let’s Talk About Love being more or less a coming out story, I still found it to be a refreshing take on the genre if only because it revolved around the complexities around coming out as ace, packaged as a romantic comedy. Alice’s bubbly exterior masks the fact that she feels a lot of anxiety about coming out. This anxiety is rooted in several factors: a fear of not being able to find a romantic relationship due to her lack of interest in sex, having to explain to every person she comes out to what asexuality even is, having to defend her sexual identity as valid and that there’s nothing wrong with her. This aspect of the book was the most realistic for me, as this very specific blend of feelings is something that many ace folks have in common.

The strongest aspect of this book is the way it delves into different aspects of attraction (romantic, aesthetic, sexual) and expressions of intimacy. While Alice and Takumi’s budding romance is fluffy and flirty, they do spend a lot of time discussing what intimacy means to each of them, as well as how they are comfortable expressing it. These conversations made my little ace heart sing, because the answers to these questions are different for every ace person. Additionally, it’s important for teen readers to see these sorts of conversations in the books they read, regardless of their sexual or romantic orientation.

Final Word: I don’t foresee Let’s Talk About Love holding up well in award consideration. That being said, it is still an important entry into the conversation around asexuality and deserves a place in libraries and, more importantly, teen readers’ hands.

One thought on “Let’s Talk About Love”